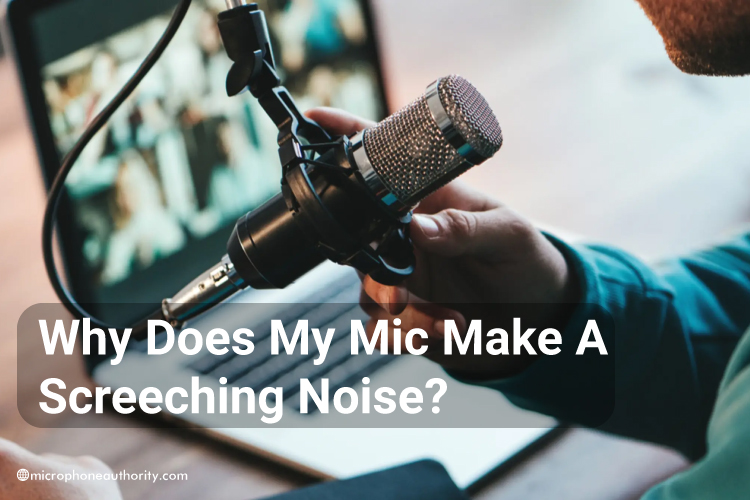 If you’re reading this, there are high odds that you have experienced an annoying screeching sound coming from a microphone – at one point or another. This screech is referred to as audio feedback, as we are going to refer to it through the remainder of this article.

Your first response after hearing audio feedback may have been to take a step back from the speakers. However, you need to know that; as long as you weren’t the one holding the mic, you weren’t the problem.

Audio feedback is an undesirable phenomenon associated with speakers and microphones. The good news is that this issue is 100% solvable.

Also referred to as feedback, audio feedback is the high-pitched screech you occasionally hear when you speak into a microphone . It occurs when there’s a sound loop between an audio input and an audio output.

Simply put, feedback is a high-pitched sound that you’ll hear over a speaker when something is amiss with the calibration or arrangement of an audio system.

To understand audio feedback, let’s first have a look at how an audio system works.

When speaking into a microphone, the mic transmits your voice to an amplifier. The amplifier then increases the amplitude of the sound signals and sends them to an audio input such as a speaker. Subsequently, the speaker converts the electric signals into the sound it discharges.

If the sound coming out of your speaker reaches your mic, the process repeats itself – resulting in a high-pitched screech. The screeching noise may get louder and louder as a result of several rounds of amplification. This looping effect can happen many times in the split of a second until you fix the problems.

It’s not advisable to put your hand over a microphone when you get audio feedback because that could only amplify the sound going into the mic. It would be wiser to turn off the microphone to break the loop of the sound and prevent the screech from getting even louder.

How to eliminate feedback

The distance from the speaker to the mic is one of the most important aspects to consider when it comes to avoiding and eliminating audio feedback. You need to position these devices in a way that the microphone doesn’t receive the sound from the speaker directly.

Here are a few more suggestions of how to deal with feedbacks:

Try to be close enough to your microphone when singing or speaking. Speaking closer to a microphone enables the mic to pick up your voice as the main sound.

Soft items such as sofas, curtains, and carpets can help you avoid screeching. These items absorb sound, hence preventing the sound from your speakers from reflecting on your microphone.

Having speakers that are too loud can cause feedback, sometimes. Therefore, you may want to turn down the volume if you don’t need your speakers to be loud. Less sound will result in less sound reflection, hence less screeching. Reducing your speaker output will also make it easier for your microphone to filter out the background noise.

4. Look out for reflective surfaces

When sound hits a wall or any other reflective surface it bounces off. The reflected sound could develop a loop that results in a screeching noise. Reduce the number of reflective surfaces in your room to discourage bouncing off of sound. Also, avoid pointing your speakers at windows, ceilings, or walls. These surfaces make sound bounce even more.

To reduce the chances of feedback occurring, simply turn off your mic when not in use. You can do so from the mic itself or your audio mixer.

6. Use a directional mic

Otherwise referred to as a cardioid or unidirectional mic, directional microphones are designed to pick up sound from one direction. A good example of this type of microphone is the MXL Mics 770 Cardioid Condenser Microphone. A product of MXL, this microphone is one of the best and affordable directional condenser microphone by many standards. It has an appealing design and comes with a compact shock mount that will look good in your space.

I use this microphone for recording audio and I must say that I am impressed by the sound quality I get. Its low-balanced frequency response allows you to get a clear, squeal-free sound you will not get with most omnidirectional microphones .

Although the MXL cardioid condenser microphone isn’t on the high-end, it offers great value for money. Its shock mount and rugged case are durable and perfect for on-the-go storage. Also, it features a FET preamp that allows for powerful, transformerless output. Its frequency covers a range of between 30Hz and 20kHz, which is pretty decent even going by high-end microphone standards. The high pass filter on this mic is 6dp/octave.

The biggest downside to the MXL 770 cardioid mic is that it doesn’t come with a connection cable. You may have to buy one separately . I also found that I was experiencing some background noise when using it. Therefore, it’s safe to say that its background noise isolation isn’t 100%.

Nevertheless, this is still a great product for the price you’re paying.

This mic is simple to set up and use. If you want to connect it to your computer, use an audio mixer. Make sure you have a sound card on your PC. Connect the mic to your mixer and the mixer to your PC, and you’ll be good to go.

Although audio feedback is annoying, it is resolvable. There is more than one way to avoid microphone screeching. The main idea is to break the loop that causes the feedback. You can speak close to the mic, get more soft furnishings for your space, avoid pointing your speakers to reflective surfaces, reduce audio output, or use a directional mic.