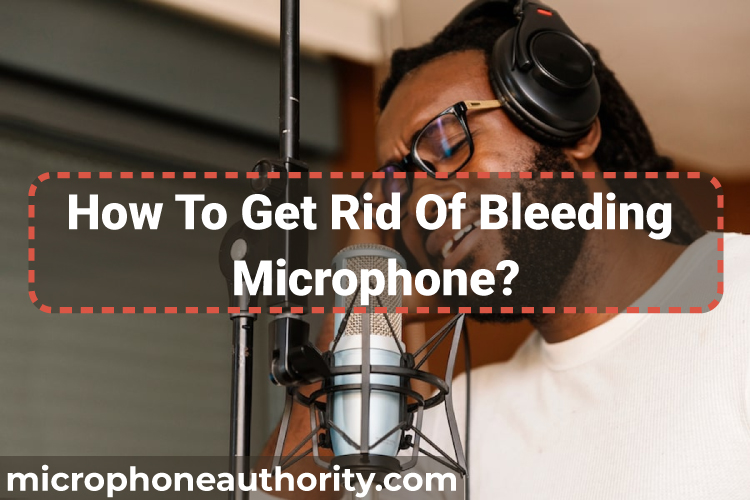 Sound Engineers will always work to achieve a clean audio, be it in a recording studio or a live stage. However, they experience numerous problems due to microphone bleed. But what is microphone bleed?

Microphone bleed is the sound a microphone picks up from non-intended sources. Though it means any sound your microphone captures that is not the primary focus, it does not include microphone noise signals such as self-noise, electromagnetic interference and handling noise.

When you are recording sound, your single sound source microphone may capture not only the audio you intend to file but also some extraneous noise. Room microphone and ambient microphone are not affected by microphone bleed. They are meant to capture all the sounds that in an environment. It is, however, a different case for spot mics, especially when they are in non-soundproof environment or one with various sound sources.

Most of microphone bleeds occur when there are headphones near a vocal microphone or when your mic that should capture the sounds from drums in a drum kit captures the sound of adjacent drums.

While the practice of singing alongside a reference track is essential to a vocalist in helping them maintain their rhythm and key, if you are not careful enough, it may lead to microphone bleed. But, what can you do to help prevent such mishap from happening?

A top reason for headphone bleed is when the sound is too high. The most effective technique to avoid headphone bleed is to drop the volume level of the vocalist headphones. It may sound better when you boost the gain, but the effects may be not only bleeding headphones but also damage to your ears.

Some studios provide headphones that allow you to switch out the ear pads. You can fit your earphones with paddings that are extra deep to offer enough cushion to your ears while also help in isolating your ears.

You can also prevent sound from leaking from your earpiece to the microphone by using in-ear monitors instead of the traditional headphones. They help to deliver sound directly into the ear canals of the performer. They are the best to use when having a private lesson since it is best not to share.

Using hunting earmuffs is an inexpensive way to help prevent audio from leaking from your earpiece. The vocalist will have to wear in-ear monitors or earbuds then you can cover them with the hunting earmuffs. The earmuffs provide a double protection layer preventing sound from leaking.

The best type of headphones to use in a recording studio is closed-back. Their design helps to prevent sound from leaking. They also help to keep external audio from the ears of the listener.

In modern music production, the drummer has to perform through several sets of microphones that are set to capture the sounds from individual components of the drum kit. Every microphone put in place helps to pick the sound of one element. The process is not straightforward since the drum kit consists of instruments that are close to each other. Moreover, there are also percussion instruments which can be very loud and transmit their sound waves in more than one direction. When performing a multi-channel drum recording, each drum is more likely to interact with all microphones. Therefore, it is tough to avoid a bleed from occurring.

You can circumvent the problem by doing overdubs: each musician will have to perform separately to a metronome beat or an already recorded drum track. There are unique booths and acoustic barriers that you can put in place to ensure that the sound you engineer is clear.

It is very similar to drum bleed but involves only single musical instruments. A good example is if you are playing a bass guitar in a room with another device and the mics of the device pick up the bass guitar. It is a common occurrence in recording rooms.

So, how can you prevent microphone bleed while recording?

It may not be easy to avoid microphone bleeding in a recording room with many sound sources. However, the best solution is to ensure that the microphones are as far apart as possible. If you have enough room in your studio, you can try to isolate the instruments in iso-booths and rely on headphone mixes. The problem is that the isolation may interfere with the musicality of the performance.

You may also choose to install a gobo in your recording room. It is an acoustic isolation panel that is movable, allowing you to position it in between musicians in the same room without obstructing their eye contact. You may require to use headphone mixes if you choose to use a gobo.

Positioning Microphones in the Room Strategically

The microphones that suffer from bleed in a recording studio are those that are dedicated to capturing individual sounds. While you need to position your sound sources strategically, you should also remember to place your microphones in the room carefully.

Carefully consider how the instruments in the room may be affecting the signals of the microphones that are close.

You can eliminate microphone bleed by applying gates or muting and unmuting the recorded audio manually. The method may not be overly effective on main instruments. However, you can use them to eliminate elements that appeared once in a while during a performance.

Are There Any Benefits to a Microphone Bleed?

In the past music was recorded in one room, with all musicians playing their instruments together. Today, recording music involves a lot more separation of instruments through gobos and isolation booths.

It reduces the amount of interaction between musicians as well as their musicality. However, by playing musicians all in one room, you can create an ambience from the room together with off-axis direct sound from the primary devices. The ambience brought about by bleed can help set a balance in the music.

However, bleed can be a problem in the recording if you want to fix a mistake in an acoustic part. Moreover, the audio you get may not be clean and crisp.