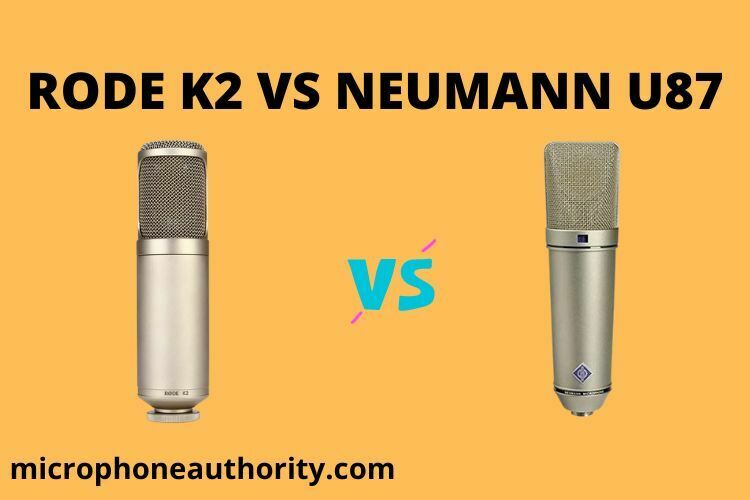 When shopping for a high quality microphone, Rode and Neumann are two companies that come to mind.

Both Rode and Neumann have been in the microphone manufacturing domain for a long time, and they’re famed for their quality microphones.

That said, we shall pit tow of their popular microphones against each other.

This comparison guide takes a detailed look at Rode K2 and Neumann U87.

Both mics are quality products but they come with different features as explained in this article.

Founded in the 1980’s, Rode Microphones LLC is an Australian designer and manufacturer of microphones and audio software.

Its products are primarily used in studio and sound recording and live sound reinforcement.

Since then, the company’s distribution network has continued to grow. Several mics have been manufactured and Rode K2 is just one of the most prominent.

The Rode K2 large condenser is one of Rode’s signature mics. This model is mostly used to record vocals and large ranges of instruments.

Other than that, the microphone gives a classic style look coupled with modern technology sound.

Its high SPL handling makes it the ideal choice for sticking out in front of a drum kit. It also sounds great on vocals.

This mic has a progressive variable pick-up pattern which is great for dialing in more room sound. This adds versatility to the package.

And although it has become one of the leading mic manufacturers, it has solid competitors and Neumann U87 is a great example in this case.

Neumann is a German microphone manufacturer founded in 1928. The company is best known for manufacturing condenser microphones for live performance and music.

Although pricey, the products are of high quality.

The original Neummann was launched in 1967. It is a cardoid, omnidirectional microphone.

The model has been used in countless recordings, ranging from pop to spoken word.

It comes with a rated impendence of approximately 200 Ohms and a load impedance of about 1 Kohms.

The microphone weighs 500 grams with a diameter of 56mm and a frequency range of 20Hz to 20 kHz.

The model has character coupled with a distinctive, subtle voice that makes it highly recognizable.

You can see that both microphones fall in the same condenser category. They also have a few similar features making it difficult to distinguish the two.

Even so, every device comes with its unique features. These can influence your purchasing decision.

Both microphones come with three polar patterns. They are such as the cardioids, omnidirectional, and figure-eight.

They are versatile, meaning they can be used to suit various needs as well as conditions.

Both mics have an impressive build quality featuring a durable heat-treated mesh head.

In both microphones, there is an internal shock mount coupled and a gold-like capsule diaphragm.

Both mics have a high handling SPL of about 162 decibels by default.

When it comes to size, Rode K2 measures 208 mm long. It has a diameter of approximately 55 mm.

The mic weighs 815 grams and comes with a build quality that features a welded and heat-treated steel mesh head that is highly durable.

In it is a dedicated power supply source too.

On the other hand, Neumann U87 is about 200 mm long with a weight of approximately 500 grams.

It has a pressure-gradient transducer that comes with a dedicated membrane capsule.

The metallic casing is rugged.

Rode K2 has a dedicated power supply source. There is therefore no need to worry about adjusting its phantom power.

It also comes with a high maximum SPL handling of 162 decibels. With the level, this microphone can take care of some of the loudest singers.

What’s more, the self noise level is as low as 10 decibels.

On the other hand, Neummann U87 needs +48 V phantom power and comes with a maximum SPL handling of 117 decibels. However, there is a 10-decible pre-attenuation pad that can be activated to help increase its limit to 127 decibels.

This is slightly lower than Rode K2’s maximum SPL handling. At the same time, the lowest self noise level is approximately 12 dBA.

Neummann, also comes with a low frequency roll off which happens to come in handy in noise reduction.

Regardless of the difference between the two mics, Rode K2’s performance is impressive. It comes with low self noise meaning that the microphone can easily capture sound clearly.

The mic’s output is accurate and detailed. Its character is bright, a common quality in condenser microphones.

Unlike Rode K2, Neumann U87 comes with a balanced, accurate sound. It offers excellent clarity since the noise level is low. It is suitable for different vocals and instruments.

If your concern is the value of your hard earned money, then Rode K2 should be your preferred microphone.

It is readily available at a lower price point and comes with good features as well as an excellent sound quality.

On the other hand, Neumann U87 is expensive although it has a great quality.