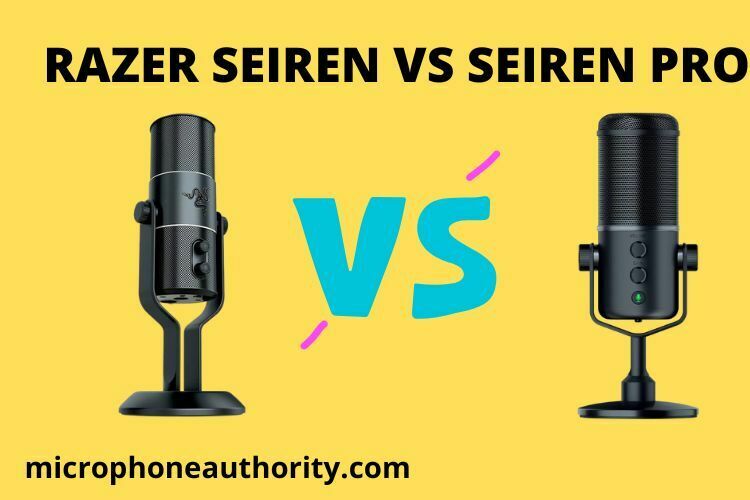 The company started in1998 and has since become the leading developer of high-end computer gaming mouse.

Now, if you are a game streamer or a professional Youtuber , then you’ve obviously heard about Razer Seiren and Razer Seiren Pro. These are the two major brands Razer Inc boasts of.

Also known as the titan in the gaming industry, it was really no surprise when Razer Inc made their professional studio microphones.

But as you may have been aware already, Razer Seiren Pro is pricier than the regular standard Razer Seiren. The two seem to be rather identical.

Although both are highly functional when it comes to voice and music recording, it would be prudent if you chose what suits your demands.

So what are their differences and similarities?

The gear gods have been advocating for this device for years and could not perform their tasks without the device. Going with a dedicated desktop microphone for gaming is a bold move despite its benefits.

Despite its supercardioid polar pattern, it picks up keyboard as well as mouse clicks.

Razer Seiren comes with a broadcast quality and a unique, broader selection of headphones. It also has a pro steamer aesthetic that your audience is always willing to pay a premium for.

This microphone aims to hit an audience while addressing the key stumbling block for people using headset microphones.

Like major gaming-focused broadcast microphones in the market, this model has a condenser with a large diaphragm coupled with a substantial shock protection that is properly anchored using a heavy stand.

The mic comes with an excellent volume control coupled with cables that run down through the stand.

Besides, the simplicity of this microphone is worth noting.

If you are worried about the appearance not popping out on the streams as you would like, then the pink option is suitable.

It is a strikingly small microphone this, coming in at about half the dimensions of its big brother, Seiren Pro.

This size comes in handy for people who need additional space on their desktops, as it will unlikely impinge on your face on the camera.

Razer Seiren Pro is a prominent high-quality mic for gamers.

It is specifically aimed at people who stream their gaming live for larger audiences.

The mic feels like a studio-level piece of device. This monster of a mic is what you go for when you get serious about recording music or just need to invest in a durable device.

The Razor Pro is a beastly accessory that should give you an instant quality boost in audio.

It comes with a brief recording of two unique sound bites.

To know more about the important features of these mics, let us compare their similarities.

Both mics are designed to serve your HD recordings with notable clarity.

Interestingly, Razer Inc does not compromise on quality.

The two mics therefore record audio in a high resolution of about 24 bit/192kHz, which is efficient in delivering accurate recordings.

They are armed with 3 14 condenser capsules and a frequency range of 20 Hz-20 kHz. As a result, they can capture about the same highs as well as lows.

The recording devices are reliable for handling loud voices.

They come with a maximum SPL handling of about 120 decibels. They are also Razer Synapse-enabled.

Both mics have an on-board quick control for polar pattern switching and controlling the mic gain level as well as headphone volume.

The two are armed with with 4 adjustable recording patterns- cardioid, omnidirectional, stereo, as well as bidirectional. These features ensure maximum versatility coupled with enhanced performance under various circumstances.

There is also an in-built amplifier that comes with zero-latency output on every mic. This is useful for direct monitoring.

While both mics are efficient in recording, some people find Razer Seiren to be annoying for failing to pick subtle details because of low sensitivity of 4.5m V/Pa.

On the other hand, Razer Seiren Pro, whose sensitivity is 12.5m V/Pa, is better at picking subtle details.

Razer Seiren Pro has a high-pass filter which can easily attenuate frequencies below 100 Hz. This is obviously an instrumental feature for reducing low-frequency noise like wind. Razer Seiren does not have this feature.

Lastly, Razer Seiren Pro happens to be a mic that can be used with XLR and USB. The package includes a 5-pin XLR cable coupled with a 3.5 mm audio extension cable and a mini USB-to-USB cable which is readily available to use.

On the other hand, Razer Seiren strictly supports USB usage only.

The additional features found in Razer Seiren Pro offer more value. Meaning, the device should serve you to the fullest in voice and music recording.

The XLR connection coupled with the high-pass filter are invaluable features that come in handy in recording too.

But if you need the mic for streaming alone, then Razer Seiren should be your best option.

Livestreaming is not just about capturing the gaming video. There is a massive audio component to the process. With a good microphone, you can reach the upper echelons of live streaming.

That is where Razer Seiren Pro and Razer Seiren come in. Part of the mic’s broadcaster series of products is directly targeted at streamers who want to improve their set-up.

The two microphones have excellent features making them some of the best in the industry.