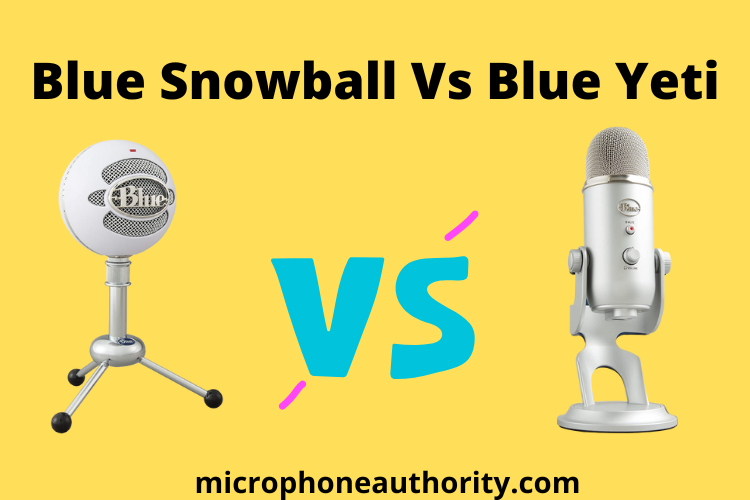 As you prepare your podcasting or you-tube gear, one essential item that you should pay close attention to is to have a good quality microphone.

As audio options continue to grow in popularity, there is a considerable number of options that you can choose to use.

Among the options, one microphone brand stands out due to its popularity in performance and design, the Blue Brand.

We will look at two microphones from Blue Designs that are excellent in their way but are always pitted against each other.

The Blue Snowball and Blue Yeti are among the top-grossing microphones from the company. Choosing one between the two mics can be a hectic task if you have no idea what to consider.

Here is an in-depth analysis of the two mics that can help you make a better decision.

Before we delve into the similarities and differences between the two mics, here is a baseline introduction of what these two microphones offer.

The Blue Snowball gives you a sense of the olden times with its vintage design and appearance. The USB microphone first came into the market in 2005 as a consumer-level microphone.

It is a personal favorite sound arsenal for You Tubers, podcasters, online streamers, and audio handlers.

There is no need for any intermediary or audio interface when you want to connect your mic to your computer. You only need to plug in and play.

While the sound quality is an important consideration when choosing a mic, a You Tuber and video streamer have to consider other matters such as the aesthetic.

A podcaster may not bother with the appearance of a microphone, but a video content creator has to select a microphone that looks just as good since it is visible to the audience.

The Blue Yeti fits the bill since it looks not only good but also delivers excellent sound quality. The microphone boasts of several features that aim at proving your recording experience.

A good example is the microphone has four distinct pickup patterns that increase the range to capture music, vocals, podcasting, and even interviews.

The sound quality from Yeti is crisp and clear as the microphone focuses on increasing sound clarity. Its recording is very smooth and streamlined with less booming and hissing sounds.

With a clear understanding of what each microphone has to offer, what are their similarities and differences?

Similarities and Differences between Blue Snowball and Blue Yeti

Both microphones come in a design that allows you to use it when on the table without the discomfort of having to keep readjusting your posture when recording.

They both have table stands that allow them to stand firm without toppling over as you speak.

Just as its name suggests, the Blue Snowball has a cute and round head sitting on a tripod. The design of the mic places the user’s interest first by reducing the chances of toppling it over.

The Blue Yeti, on the other hand, does not come in the shape of a ball. It has a retro look that is quite appealing.

Instead of a tripod, it comes in a stable stand with a circular and robust base that ensures its stability. The boom arm allows you to adjust the microphone as you see fit.

Between the Blue Snowball and the Yeti, the latter is much bigger and taller, thereby occupies more space than the former.

Therefore, if you are working in a smaller space, the Blue Snowball would be a better option. However, if you want a more reliable bet, you may consider the Blue Yeti.

The Blue Snowball makes use of three polar patterns: cardioid, cardioid with -10dB and Omnidirectional. Other than that, it produces a vibrant sound that scores better than moat models in a similar price range.

The one downside it has is its sensitivity to background sound when in the omnidirectional mode. However, you can curb this by introducing a pop filter.

The Blue Yeti, on the other hand, makes use of four polar patterns.

Besides the diverse polar patterns, the mic delivers an excellent sound quality making it one of the best suited for voice-overs and podcasting.

In terms of the performance, the Yeti over-delivers when you compare the two mics. Not only does it have a better sound quality, but it is also versatile due to its polar patterns that increase its practical application.

The two mics significantly differ when it comes to cost with the Yeti almost going for double the price of the Blue Snowball.

While the Blue Snowball is very affordable, it still delivers a vibrant sound that many microphones cannot compete to meet. It is the best option to use when starting your podcasting journey.

The Blue Yeti may seem pricey, but it provides much more value with its somewhat upgraded list of features that improve your recording experience.

Moreover, it delivers excellent sound and has an impressive aesthetic appeal.